Hello everyone, I want to present you my new private mod Zombie Escape Liberty for CS 1.6. This is my second work with the ze mod, I tried to do something unique, I think I did it. Details of the new mod in the full fashion news. + The build is based on ZE-X but a lot of self-written and remade to fit its base.

Zombie Escape mod for Counter-Strike 1.6 is one of the most popular and funnier mods that you can play online! In fact, many servers are still using this mod and attracting a good amount of players as an audience as well!

As the mod of the game says, the gameplay consists of escaping from zombies in order to survive.

The round starts with a 20 seconds phase (timing is editable) when humans need to select weapons from a menu.
After the countdown has end, the selection of weapons is closed and the humans have to start running (escaping). This phase takes 7 seconds, where zombies are frozen and unable to move. This will the humans an advantage in order to succeed in the escaping mission.
When the freezing seconds ends, the escaping round starts and the chase becomes! This is the main phase of the gameplay where humans have to run to achieve the target (usually helicopter, boat..). The humans have already the advantage of time and weapons but on the other hand zombies have more speed to chase!
You can always download cs 1.6 and install a free non-steam version. Which you use to test the zombie escape mod online in servers or install it locally with bots. The provided website is tested and trusted and super fast, you can download the full edition highly compressed in just a minute. 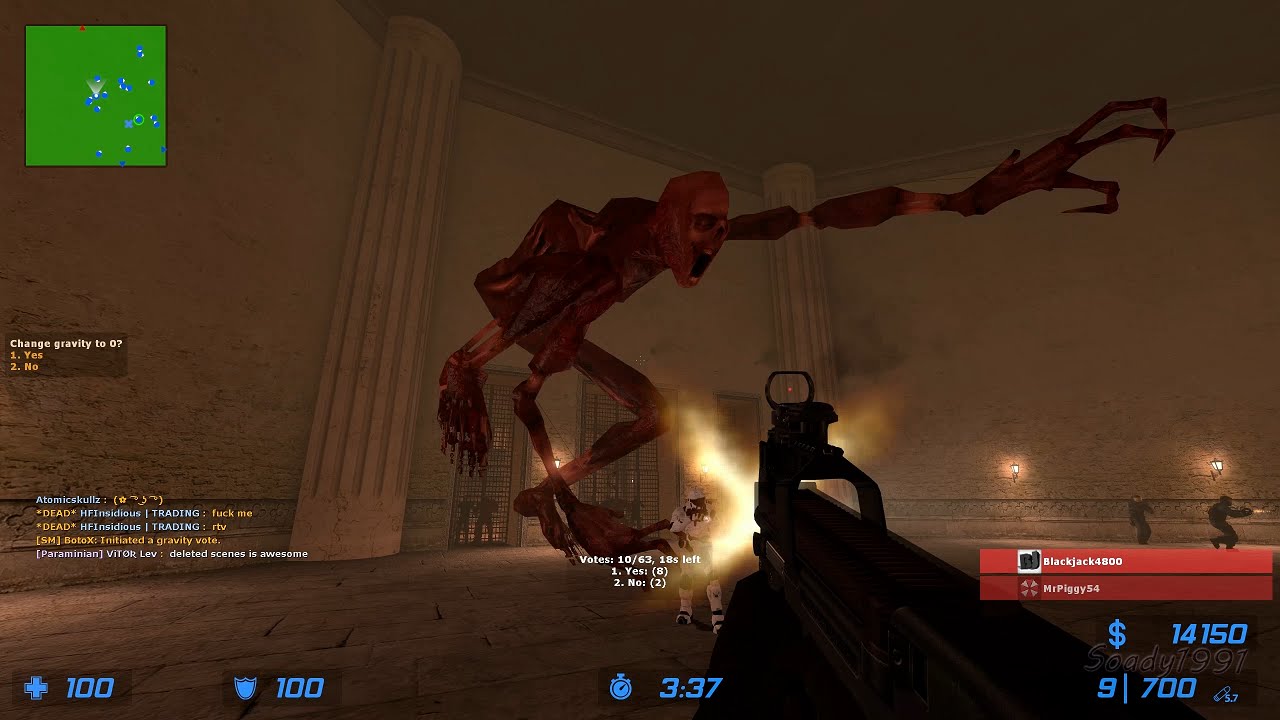 When it comes to mod objective, and as I did mention before, it's the surviving, but with more!

Humans team main objective is to achieve the escape point without getting infected. At the first place, they start escaping first (7 seconds phase). After that, as the zombies are way faster, they have to use the guns (with grenades) to push them back. If a human gets attacked (hit) by a zombie, then he's infected and joins the zombies' team. So, humans need to avoid getting infected as well as achieving the escape point!

Chase them all! After all, that's what zombies do, even in movies and other games. Zombies team have the objective of chasing and attacking the humans' team. They win by infecting all the humans and killing the last survived human. While humans try to hold them back using guns, zombies have to avoid the bullets and find the best spot to achieve, attack and infect!

If you are a server owner, I suggest that you use this link. This is a zombie plague mod (amxmodx built) using ReHLDS and ReAPI, which allows you to have a smooth server with the most minimum requirements of a cs 1.6 server. Or you can use a normal HLDS plugin here. Both will allow you to install and run the server but with different specifics!

Zombie Escape mod is a great cs mod that you need to try. In this post, we did cover the cs 1.6 mod version. If you like, share it and leave a comment below. Have Fun!