You're located in category:

Moto Racer is the first title in a relatively successful series Delphine developed for Electronic Arts. This 3D arcade motorcycle racer allows you to ride superbikes and motocross. Race Time Attack, Single Race, and Chanpionship Circuit are available in both 'motocross' and 'superbike' modes.
Although it's not meant to be a realistic racing simulation (and indeed it was always billed as an 'arcade' racer), Moto Racer's physics engine is still more than reasonably realistic. The feeling of sheer speed you get when playing the game is palpable. From fishtailing around corners, to slipping around on the snow and flying through tunnels, the feel is what makes Moto Racer a lot of fun to play.
Similar to many racing games, there are only a few basic keys/buttons you need to know: gas, brake, turn, and boost (turbo) which makes the bike 'pop a wheelie'. Moto Racer offers 8 courses, half of which are designed for superbikes and half for motocross. There are also 8 different bikes to choose from, each varying in acceleration, maximum speed, grip, and brakes. If you can manage to finish in the top 3 in all the courses, you can then race them in reverse mode. After beating all the courses in reverse mode, you will get to race in a very amusing pocket bike mode (i.e. little bikes driven by adults). The courses are nicely varied, with good detail on background scenery.
Expert racers will probably find Moto Racer too easy and too unrealistic, since the only way to crash a bike is to run into a wall while doing a wheelie or while in a jump. But it should still take even the most hardened racer quite a few hours to make it through to the pocket bike mode - and the game's highly detailed 3D graphics helps maintain interest. Although it's not incredibly realistic, the fast physics engine, nice graphics and simple gameplay make Moto Racer one addictive game you'll likely come back to time and again. Highly recommended. 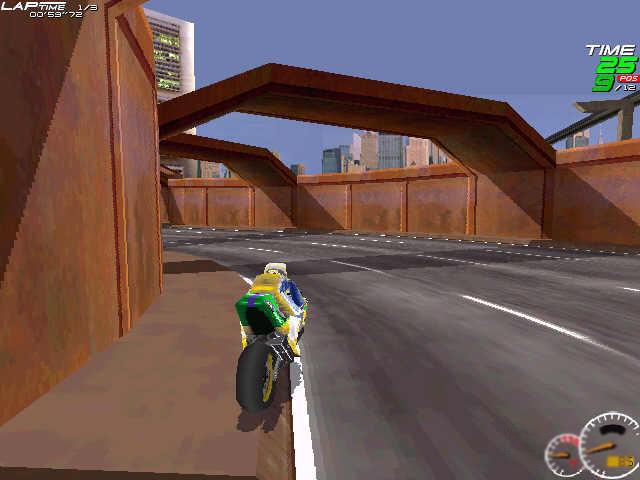 Moto Racer is a 1997 arcade motorcycle racing game that features both street and dirt bikes. It was one of the good ones to surface around that period offering quality fun and an intense experience.

Moto Racer’s time of glory has passed a long time ago, but that doesn’t mean it’s not good anymore. There is a good number of recent games that aim to recreate the look and sounds of old school racing games, so, instead of playing those, why not give the real thing a try.

Your biggest challenge will be to run the game. A relatively basic PC is needed for it to work but a way of fooling the game about the system it’s actually on should work. If you get passed this step, the rest is good ol fashioned fun.

It’s not worth elaborating on the fact that you shouldn't expect amazing graphics or impressive audio, even though the latter still surprises. What you can actually count on is the authentic arcade gameplay complete with announcer and sometimes silly collision mechanics.

Race on the track and off it

In Moto Racer, you could opt for both solo and LAN play, and that was a good thing, it still is. After all, why not enjoy this with a friend. It features three face modes, Practice, Single Race, Grand Prix, and it allows you to race dirt bikes as well as street bikes on a decent number of diverse tracks.

Whenever you’re ready to race, you just need to pick a track type, opt for one of the several bikes and then just give it your best. The latter means that you will mess up a lot if you’ve never played this one or similar titles from that time. Keys are not hard to master but bike control takes a while to get used to, and practice makes all the difference between breaking records and almost finishing third.

On a closing note, Moto Racer is mainly a nostalgia fueled game. Comcast free installation 2014. Remembering the old days is probably the only reason most people still play it. The other part either doesn’t have anything better to do or simply get it that back then, games were built differently.